Amy is the partner of Brubakers with her husband Glenn.  Amy has had a fascination with all things sewing since the age of 12. With a degree in Textiles and Design from Illinois State University, Amy has worked in the sewing machine industry since 1980.  With her extensive knowledge of machines for over 30 years, she has seen machines progress from simple mechanical workhorses to high tech computers that sew.   Amy’s love is creative sewing and her work can be seen in the many patterns she has designed and books she has authored. 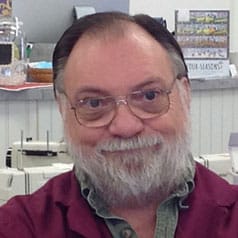 Glenn Smith has over 45 years experience in sales and service of domestic sewing machines.   Glenn began his experience in the textile industry as a teenager and began working in the industrial sales division of Pfaff in 1980. He later began working for the Pfaff household division from 1983-1999, until purchasing Brubaker’s Sewing Center.  Glenn has been recognized with the highest rating of electronics diagnostics and repair of Pfaff Circuit boards. He is one of the few technicians remaining in the United States with the skill and mastery to rebuild and repair Pfaff 1200 series machines such as the Pfaff 1222 and 1222E.  In additon, Glenn is committed to preserving and refurbishing all German Pfaff machines produced between 1970 and 1999.